What Is a Normal ECG in Athletes?

Up to 60% of athletes show ECG changes, and some of these changes are often striking to look at.  The Seattle ECG criteria is often used to separate the normal from the abnormal ECG in an athlete. This is important, as many normal athletes undergo cardiac angiography and even pacemaker surgery because of misinterpretation of their ECGs.

The following ECG was taken from a  55-year old male who presented to the ER with 2-hour history of persistent heavy discomfort across the anterior chest with radiation to the neck. 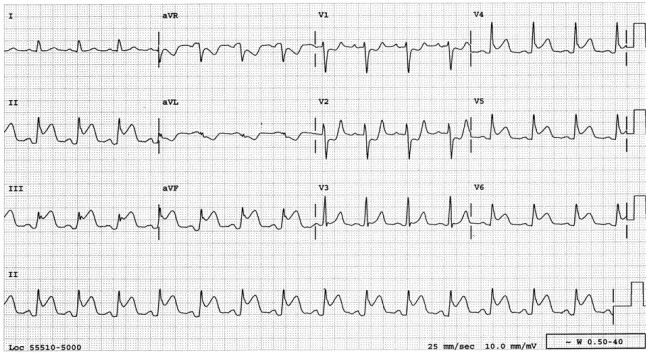 1)- What is the ECG diagnosis?

Written by Dr. Hassan Gargoum on May 21, 2012. Posted in Cardiology News, Clinical Electrocardiography. Leave a Comment

A consensus statement on the management of asymptomatic patients with Wolff-Parkinson-White (WPW) syndrome has been presented at The Heart Rhythm Society (HRS) 2012 Scientific Sessions. This statement should help clarify which young people should undergo catheter ablation. While there is a small chance that an asymptomatic young person could end up having a life-threatening arrhythmia, the number is not zero. Yet, catheter ablation for every young individual who has ever had a WPW pattern on his/her electrocardiogram (ECG) is also not the answer.

Cohen and colleagues released the statement on May 18, 2012 at the Heart Rhythm Society Scientific Sessions.

The guidance is explicitly directed at physicians treating young patients with WPW and defines young people as between eight and 21. At the crux of the document is the question of just when physicians should intervene—and when they shouldn’t—in young people found, on ECGs, to have the signature electrocardiographic WPW pattern. These are increasingly important questions, given increased emphasis on pre-participation screeningfor sports in young people.

The expert consensus statement, a joint effort of the Pediatric and Congenital Electrophysiology Society (PACES) and the HRS, estimates that from one to three young people per 1000 likely have WPW, although many—around 65%—are asymptomatic.

The guideline writers recommend the following: