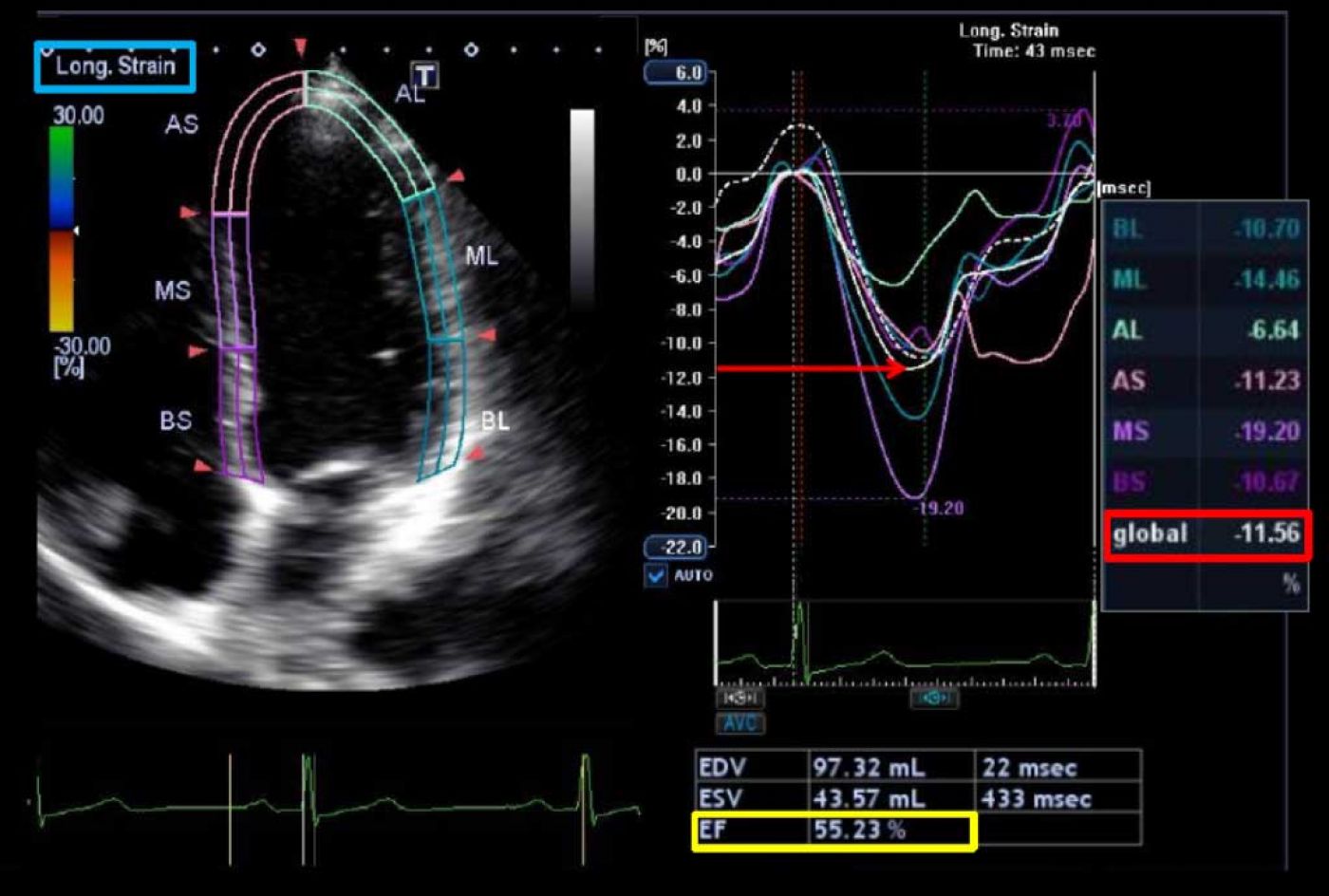 The mortality rate among patients with cancer has decreased over the past 20 to 30 years. However, cardiac toxicity (cardiotoxicity) from cancer therapy has become a leading cause of morbidity and mortality in survivors. In patients who develop heart failure (HF) from cancer therapy, the mortality rate is as high as 60% by 2 years. Therefore, contemporary management of patients with cancer should include careful consideration of potential cardiotoxicity during therapy, with a focus on early detection and intervention.

Several definitions of cardiotoxicity have been proposed. The most commonly used definition is a ≥ 5% reduction in symptomatic patients (or ≥10% reduction in asymptomatic patients) in the left ventricular ejection fraction (LVEF) from baseline to an LVEF < 55%. Early detection of cardiotoxicity has predominantly relied upon serial cardiac imaging to identify a reduction in left ventricular (LV) function without signs or symptoms of heart failure (stage B HF).

The use of LVEF has important limitations. First, the measurement of LVEF is subject to technique-related variability, which can be higher than the thresholds used to define cardiotoxicity. Second, the reduction in LVEF is often a late phenomenon, with failure to recover systolic function in up to 58% of patients despite intervention. Hence, there has been a growing interest in markers of early myocardial changes (i.e., changes with normal LVEF) that may predict the development of subsequent LVEF reduction or the progression to HF, so that preventive strategies with established cardioprotective medications such as beta-blockers, angiotensin-converting enzyme inhibitors, or dexrazoxane could be implemented.

All studies of early myocardial changes with chemotherapy demonstrate that alterations of myocardial deformation precede significant change in left ventricular ejection fraction (LVEF). Using tissue Doppler-based strain imaging, peak systolic longitudinal strain rate has most consistently detected early myocardial changes during therapy, whereas with speckle tracking echocardiography (STE), peak systolic global longitudinal strain (GLS) appears to be the best measure. A 10% to 15% early reduction in GLS by STE during therapy appears to be the most useful parameter for the prediction of cardiotoxicity, defined as a drop in LVEF or heart failure.

A systemic review published in July 2014 in the American Journal of Cardiology (JACC), by P. Thavendiranathan et al.,  confirms the value of echocardiographic myocardial deformation (strain imaging) parameters for the early detection of myocardial changes and prediction of cardiotoxicity in patients receiving cancer therapy.

These results can be summarized into the following key points: